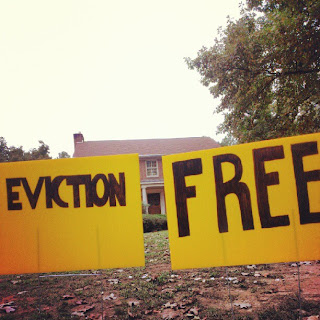 By last night we had a feeling that aspects of Jaqueline Barber's campaign was cause for serious curiosity by the mainstream media, but no one had any idea how far the story would go out and how many outlets would carry it.

The Associated Press story has circled the globe, it was on the front page of yahho.com all day, it was the subject of three talk radio stations that we know of, it was an all day story on every tv station in Atlanta, and we've been getting all kinds of interesting press inquiries.

The notable part of the narrative that seems to be drawing serious attention to the story is the fact that Jaqueline is a former APD detective and that there is a pretty large community of former co-workers(some active, some retired) who are down to stand in the yard with her during a press conference.

The image that most conjure up of police and Occupy is a antagonistic clash, police in riot gear, protesters screaming, police brutalizing a crowd after being given orders to evict the movement.

I've seem there's images myself, in real time. I was personally arrested five times by APD in last 2011, early 2012. 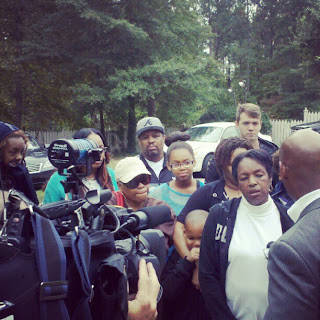 I can tell you that as housing justice organizers, no one involved with Occupy Our Homes ATL, or AFSC hesitated to take on this campaign because of Jaquelines APD credentials. If anything it's an opportunity to have a real conversation, on a national level, about who our economic system is and isn't working for.

I can also tell you that on the lawn of Jaqueline's home there is no animosity, in fact it's the last thing on anyone's mind(beside media covering the story). Today APD officers, neighbors  family members, and Occupy Our Homes ATL organizers had a single focus; how can we make sure this ill woman and these children don't have to experience the nightmare of eviction.

I want to encourage folks in the Atlanta area to sign and share the online petition, and more importantly come stand with Jaqueline this Thursday at 9am!