The People VS Wells Fargo 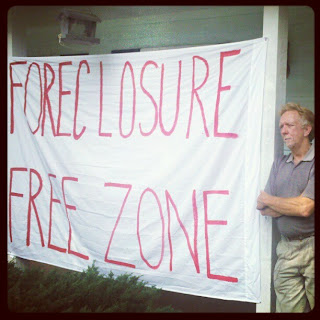 Homeowner Steve Boudreaux, who we've been working with alongside Occupy Our Homes ATL and the Cobb Coalition for Change, hosted a press conference outside his home at 3 pm to declare that he is fighting to keep his home off Rubes Landing in Marietta.

We plan to support Steve and stand along side of him as he refuses to leave the property until Wells Fargo makes a deal that keeps him in his home.

After battling unemployment and struggling to make payments on his mortgage, Boudreaux applied for an emergency home loan modification to stay in his home at a rate he could afford.

Boudreaux said everything was all set to move forward until the IRS delayed in getting tax transcripts to his bank.

A demonstration was held Friday outside of the Wells Fargo branch where Boudreaux took out his loan. 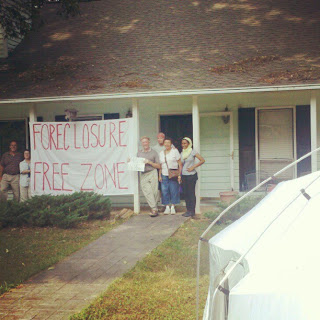 On Monday, tents were be pitched and supporters began a 24/7 vigil until Wells Fargo makes a deal to keep Boudreaux in is home.

"Georgia is now the epicenter of the foreclosure crisis. We have to do something about this, and we have to do it now," says Occupy Homes organizer Allie McCullen.
Posted by Atlanta Economic Justice Program/AFSC at 2:30 PM