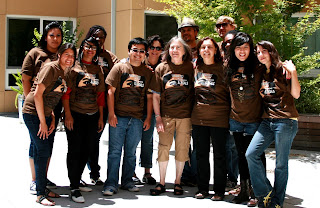 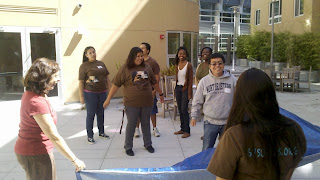 AFSC Staff from Chicago, Atlanta, New Orleans, Baltimore, Oakland, Los Angeles, Portland, and Seattle came together July 20-23 in the Bay area to explore ways to improve the impact of our work and create more ways to cross pollinate our local work. The common thread between staff who came out to the meeting was our youth focus.

The meeting was hosted by AFSC's Pablo Paredes who's doing some pretty dynamic youth work in the Bay. Pablo has brought together an amazing group of young folks who have founded, or birthed the 67 Suenos movement. 67 Suenos youth organizers played a huge role in developing the weekend agenda, preparing meals, and keeping everyone energized. BIG ups to 67 Suenos crew!

I'm super pumped about the projects that will be coming out of this gathering. Look for more news about our Migrant Youth Voice Project making bigger national waves, and we also are beginning initial plans to roll out a youth organized national tour call...LOVE BOMBS!

We also had the chance to show the locally produced short documentary, "Last Best Option" which focuses on SCAP work we've been doing in Atlanta this year. Check it out:

There was also talk of doing a 2013 national youth conference that would be youth organized, youth attended, and youth lead! So we're on the move ya'll!