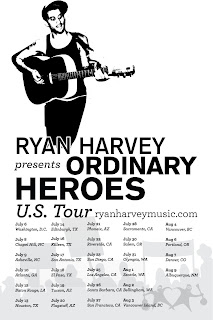 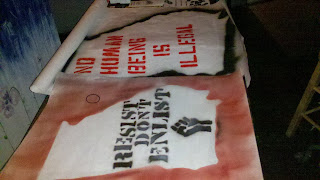 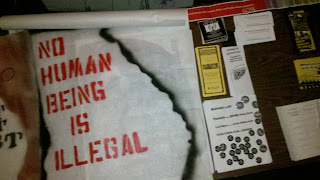 Yesterday Ryan Harvey's, "Ordinary Heroes" tour rolled through Atlanta. AFSC Atlanta was super excited to support the show and have an information table set up. The show was at Wonderroot Community Art Center and drew a pretty solid crowd of young folks.

It wasn't my first Ryan Harvey show, so it was definitely no surprise to see how captivated the crowd was by Ryan's ability to tell a stories with strong, astute political analysis, while rocking a distinguished vocal flow. I've come to really enjoy watching folks react to Ryan's music for the first time.

Often art can cut through someone's apathy to help them not only understand an issue that seems complicated, but also believe that they can create the change they want to see in the world or their communities; Ryan's music seems to have that effect on folks, it often forces those in the audience to change up their lens a bit.

During his set Ryan went out of his way to encourage folks to attend this year's, "Be The Change" youth convergence , which is being held July 29-31 in Atlanta. We had information on other projects to we gave out to attendees and we also had homemade posters on hand for donation, with all the proceeds going to "Be The Change" scholarships. Ryan also mention a project that he co-founded called Civilian Soldier Alliance , an organization that supports resistance to war and occupation with in the ranks of the military.

We will be adding some video footage in the next two days, so come back and check it out!

...and here's that promised footage!