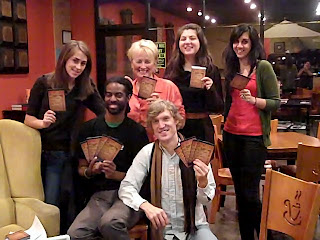 Last year over four billion dollars was cut from Georgia k-12 public education, and students attending publicly funded universities saw their fees increase by 17%. The long term effects of these cut, if they remain, on the future of education in our state seem unmeasurable. We already know that some school districts are being forced to ration calories at the lunch line, institute four day school weeks, and of course cut teachers and school workers. It's hard to imagine things getting much worse...but they can, and they might.

This upcoming legislative session could see even more budget cuts for k-12, and more tuition and fee hikes for college students. That's why are work to build a movement to defend public education is literally a fight for the future, that's right our future is on the line here; not just the future of every current student but every future student.

This past week kicked of the first of several dozen trips we are organizing around the state in our effort to build a campaign to defend education. We had two organizers from Georgia Students For Higher Education join me on the road to Statesboro Georgia, home of splash in the boro, Georgia Southern University, and the best Howard Johnson in the Country. We had the pleasure of meeting with Bobbi Jo Rogers, Jeremy Foreman, and Dr. Rosemarie Stallworth. They couldn't have been a better trio. Jeremy is and extremely hands on staff with the hands on network, he also just seems to know every single soul in the boro, no joke. Bobbi Joe is an education major at Georgia Southern, and Dr. Stallworth has very to Georgia Southern. It seems that, during our meeting, we established some pretty clear challenges and next steps to begin organizing in the boro and ways to plug into te broader statewide network.

Big Ups to Sofia Lipko and Hira Mahmood for rolling out there and helping to make this meeting be a success!

If you're interested in bringing us out your way just let us know!