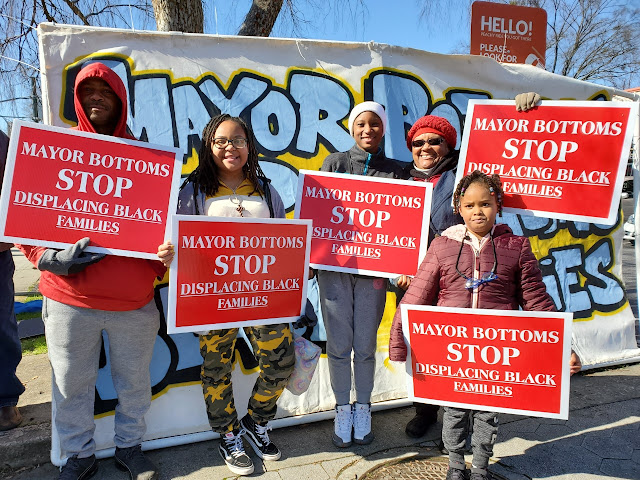 In response to flooding resulting from over development and neglect, former Atlanta Mayor Kasim Reed decided that 27 homes in Peoplestown, a historically black neighborhood of in Atlanta needed to be demolished to make room for a Japanese themed park and pond.  As a result of persistent protests, rallies and resistance by community members, he decided that one resident, 93-year-old Ms. Mattie Jackson, could stay.  The city of Atlanta filed eminent domain lawsuits against the remaining residents who refused to leave in October 2016.  Resident's names were removed from their deeds, and though they continue to pay their mortgages for the past three years, they do not own their homes and can be evicted at any time. Of the 27 homes and families that originally occupied the block in the heart of Peoplestown, only four homes and four families remain.

In the midst of a three year court battle, emails surfaced that were written by a former City of Atlanta engineer, who was the project manager for the proposed park and pond, stating that the City didn’t have the necessary engineering to support the taking and demolition of an entire block of homes.  Those emails were written in 2013, BEFORE the first home was demolished.  The engineer, Kimberly Scott, testified in court, under oath, that the actions of the City were neither necessary nor justified and she testified before City Council and asked them to “correct [the] wrong.”
(​See the emails )

After years of protest, online petitions, and media coverage current Atlanta Mayor Keisha Lance Bottoms agreed to meet with one of the families, Mr. Robert and Bertha Darden, to discuss their desire that the lawsuits be withdrawn and they be allowed to stay in the home they have lived in and raised their children and grandchildren in for over 30 years.  During that April 30 2019 meeting the Dardens shared with Mayor Bottoms the evidence that clearly showed that the City should have never sued them in the first place for their homes and provided her with alternative plans for the block developed by the engineering firm they hired to assist them in the litigation. 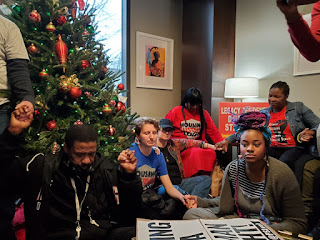 The Dardens left the meeting, which a press release from the Mayor’s office described as “productive”, hopeful that a resolution was near.  Nine months passed and the Dardens heard nothing from the Mayor and the litigation continues.  In December 2019 the Dardens and Tanya Washington, with the support of the Housing Justice League, planned a rally on the steps of city hall and a sit-in in Mayor Bottoms’ office.  After 11 hours, senior officials, Rashad Taylor and Rev Eric Thomas reached out on behalf of the Mayor and expressed a desire and intention to bring the matter to an end before the Christmas holidays.  Residents left city hall and went home to their families with the expectation that the matter would be resolved before Christmas and certain that they would not carry the 7-year fight into the New Year. There was a sense of relief at the thought of lifting this burden.

The effected residents asked if Deborah Scott with Georgia Stand-up and myself could negotiate on their behalf. We decided to go into negotiations with Mayor Bottom's administration with the assumption of trust despite a track record of poor communications, broken promises, and unanswered calls/emails. We met the day immediately following the sit-in. Reverend Eric Thomas and Rashad Taylor represented the Mayor's office. The meeting was friendly and lasted about an hour. We spent our time laying out terms that would end the campaign and present a win-win solution for the city and the remaining residents.

It was clearly communicated that the family's terms were reasonable and the Mayor Bottoms was highly motivated to do right by the families. We left the meeting Tuesday December 17th with an agreement that a written road map to resolution would be completed by Friday December 20th.

Over the course of the week we continued to negotiate through email and text message. It started to become clear that the Mayor's team was moving very slowly. We began to hear something that many community organizations have been hearing in regards to promises from this administration, "We're working on it."

I began to fear the worst, that we had fallen into a trap. Certainly the Mayor wouldn't promise a positive solution to this problem just to get us to pause the campaign through the holidays? Of course this Mayor wouldn't intentionally enter into bad faith negotiations?

I began to ask if there was anything the families were asking for that the Mayor took issue with. Was the slow down in progress due to ifs or hows? It was made clear that the Mayor had no real issues with any of the families requests and they simply needed more time to work out details.

So we compromised and asked Rashad Taylor and Rev Thomas what deadline would work best and Rev Thomas let us know that Dec 31st would work, so we agreed on a second deadline even though doubts were beginning to arise.

On January 2nd Rev Thomas said they need more time after which we never heard from either Rashad or Rev Thomas, the Mayor and her team has totally ghosted the families since. I can't tell you how difficult it was to watch the joy and hope build as families fighting for their homes began to believe that the Mayor really wanted to work out a solution that all parties could live with only to have the rug pulled out from under them yet again.

As one of the negotiators entrusted  by the families I felt embarrassed to admit that I believed Mayor Bottom's team was acting in good faith, I encouraged the families and the organizations advocating for them to put the campaign on pause only to have them ignore community after the holidays passed. In my mind it begs the question, is there any good faith in Mayor Bottom's administration?

In the aftermath of this disappointing chapter of this 7 year fight Tanya Washington expressed her pain and confusion, "I simply can't understand how a black, female Mayor who pledged to support the community who voted her into office can treat people this way.  She has seen the evidence that this was never necessary and she refuses to right the wrong the City committed.  My family and I are so tired of this fight.  If Mayor Reed had the power to decide Ms. Mattie could stay in her home why can't you use your power to allow us to stay in ours?"      Mrs. Darden, a senior who has lived in home in Peoplestown for 30+ years is heartbroken. "How long does it take to do the right thing?"  she asked Mayor Bottoms at a recent Invest Atlanta meeting. "All of this could have been avoided.  Since April of 2019, you gave me and my family hope and then in December 2019 we still had hope, and now we have no hope.  You have shown us that we cannot put our trust in what you say.  The faith we had in you is gone because you do not keep your word and because you will not do the right thing by us."

The truth is we don't know where things stand with the Mayor and the Peoplestown eminent domain fight because the community has been shunned by her office yet again. Maybe she's to busy stumping for Joe Biden, maybe her schedule is to jammed hanging with celebrities instead of following through with commitments she's made to community. At this point we have learned we can't hold our breath waiting on this Mayor to do the right thing.

So we will continue to show up wherever Mayor Bottoms is so we can tell the truth, so we can remind her of the commitments she's made to communities, and we can hold her accountable to them.  As former Senator Vincent said said, " Using eminent domain as a device to displace black people from their homes is shameful.  That's why I joined the Dardens and Tanya Washington on the King Holiday outside of Ebeneezer Baptist Church to protest Mayor Bottoms' ruthless gentrification policies; educate the public and encourage others to join our resistance."