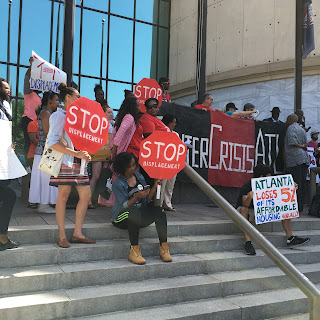 Atlanta is in a renter’s state of emergency. How many of us have engaged in or overheard conversations with folks in our city about the rising rents and rapidly changing face of our city? Development doesn’t have to be a bad word, but what we are seeing in Atlanta right now is the kind of development and wealth extraction that will leave Atlanta totally unaffordable for low and moderate income people.

On Tuesday July 12th at 11am on the Trinity side of Atlanta City Hall the Housing Justice League released our, “Renter's State of Emergency” report and declared Atlanta a state of emergency for renters and low income homeowners. After the press conference we presented the report to City Council members.

Some of the report’s findings include:

*Since 2012 Atlanta has lost 5% of its affordable housing every year
*95% of Apartments built since 2012 have been considered luxury
* 72% of Atlanta neighborhoods are considered gentrified or gentrifying
* More than 53% of all renters in the city pay more than 30% of their income on housing, yet many landlords require proof that tenant income exceeds 3x rent

The Rally and Press Conference kicked off with welcoming and introduction to the report from Deborah Arnold. Senator Fort then spoke declaring that "We need to build an Atlanta for everyone." Senator Fort was then followed by stories from those who have been most affected by Atlanta's Renter's State of Emergency. 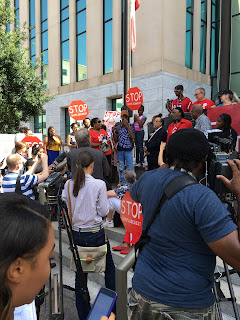 Autumn Rivers, Atlanta Native and a college student a Bard College, spoke about her experiences growing up in Atlanta, being evicted, and hoping to move back to Atlanta after College, but not being sure if she will be able to afford to.

Avery Jackson said, "There are systemic intersections of how black people and low income folks are not prioritized in this city." and declared "it is a renter crisis in the city of Atlanta."

Nashia Clemons and Rosalind Hemphill, work and make $7.25 an hour and are both homeless.  Rosalind Hemphill said, "I sleep outside. I can't afford anything. I've been here for 20 years." With Atlanta's current rent prices, it makes it difficult for hard working people to afford rent, especially if they are working for minimum wage. 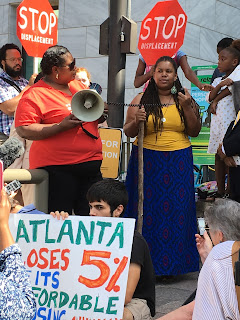 David Waid, a Marta worker,  who can no longer afford to live in the city he works in said "What our reality is, we can work here, but we can't live here". 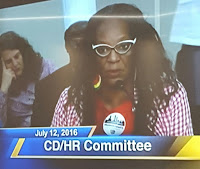 The last speaker was Vera Web. Web lives in a senior facility and  spends 60% of her income on her rent because her rent has continued to increase each year. "My rent increased by $85 a month this year, not because the place got fixed up, simply because they felt they could charge more despite the fact that we are seniors who are mostly on a fixed income"

After the Rally finished, members of the Housing Justice League went into City Hall to deliver the report to the Community Development and Human Resources Committee. Sherise Brown and Alison Johnson gave public commentary about the reports findings and delivered the report to City Council members.

On July 19th, at 6:30pm in the City Council Chambers at City Hall (55 Trinity Ave SW) there will be a public hearing, where people struggling to afford Atlanta can testify and share their housing story with local and state lawmakers. This hearing is the opportunity for law makers to hear stories of those experiencing an affordable housing crisis. The hearing will be presided by Councilman Dickens, Councilwoman Moore, Rep Park Cannon, Senator Fort, and others. 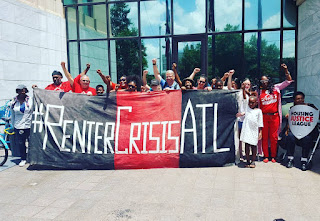