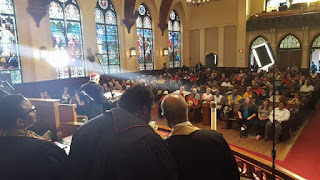 Over the last month a quick coalition formed to organize a classic revival with a pretty big twist with Rev William Barber founder of the Moral Monday movement in North Carolina. There was no money offerings taken, no one was cured of physical ailments, no one was asked to repent or be save, anointed cloths were not for sale, this was a different kind of revival. Instead the revival was interfaith with a strong emphasis on social justice. The only pledge folks were asked to give was one to get involved in local efforts to push for policies that increase the minimum wage, make healthcare accessible to those that can’t afford it, protect the LGBTQ community, reform the criminal justice system, protect and expand affordable housing, protect immigrant rights, and more. 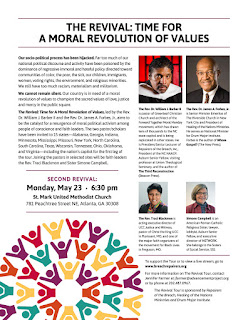 Over 400 people showed up the the Revival, which was held at St Mark Methodist Church and over 300 viewed via live stream! 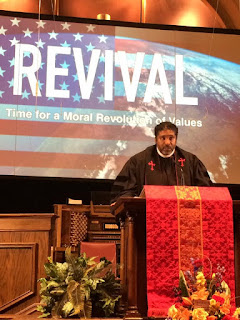 To see the whole event on video click on this link!

Our Mission of the revival: The nation needs the next Great (Re) Awakening in order to build and secure the Third Reconstruction. Based on fusion multi-racial coalitions, the goal is to mobilize faith communities and people of conscience to give moral voice to the call for an anti-racist, anti-poverty, pro-justice agenda to invest in impoverished communities. Leadership will come from faith and moral leaders with deliberate outreach to African-American, Latino, Native American, Asian and white clergy of diverse backgrounds and religious affiliations, along with other leaders with moral authority in an effort to build an enduring base, power and infrastructure that can affect change not only in the current election cycle but also well into the future.

1. Build state based power rooted in moral analysis, articulation and activism that can drive persistent movement on policy agendas at the level of state legislatures and governors.

2. Reframe the national conversation from the state up and from the bottom up around moral issues of race, poverty and gender.

4. Lift up and empower progressive moral voices in the national conversation, including members of the most marginalized sectors of society.

5. Provide a moral framework for policy discourse and provoke robust solution-oriented agendas on poverty and the persistent racial inequalities that plague our nation. Utilize 2016 election as megaphone for the issues.

American Friends Service Committee is proud to be a part of this effort and we ask that you stay tuned as next steps are rolled out!
Posted by Atlanta Economic Justice Program/AFSC at 2:22 PM