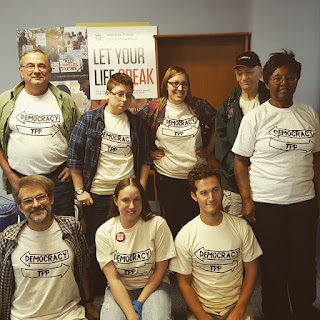 As the Trans-Pacific Partnership (TPP) trade talks unfold in Atlanta in an effort to finalize the pro-corporate deal, the quickly formed Atlanta #StopTPP Coalition, which includes American Friends Service Committee has come together to organize a number of rolling nonviolent actions to make it clear that the anti-democratic trade deal is not in the best interest of regular everyday people around the globe. The citizens in Atlanta and the global community have continued to nonviolently resist the agreement. We won’t stand for a wholesale auction of our rights, our freedoms and our democracy to multinational corporations who put profits over people.

Community members and concerned citizens from labor, faith, youth, senior, environment, LGBT, and others are coming together and inviting all within our United States and the global community to draw a line in the sand in Atlanta and to demand that the TPP shall not pass!

The Atlanta and global community will not stand for the TPP corrupting our democracy and eliminating our rights by putting corporations such as Walmart, Chevron, Cargill, and McDonalds in greater control of our daily lives leading us into a global race to the bottom. The undemocratic and secretive TPP would threaten good jobs, public services, access to affordable life-saving medicines, the environment and our climate, consumer health and safety and much more in our communities across the world. 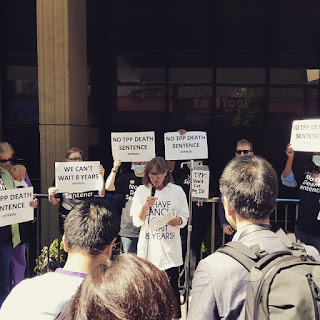 Yesterday, during the TPP negotiations, cancer patient Zahara Heckscher was arrested after disrupting the negotiations for the Trans-Pacific Partnership (TPP) in a protest aimed at maintaining access to affordable cancer medicines in the 12 countries affected by the trade treaty.

Heckscher, in a t-shirt reading "I HAVE CANCER. I CAN'T WAIT 8 YEARS", and holding an IV pole that read "TPP: Don' t Cut My IV,” refused to leave the Westin Hotel, the site of the negotiations between U.S. Trade Representative Michael Froman and the other TPP trade ministers. She demanded that they show her the secret TPP text to verify for herself and other people living with cancer around the globe that TPP would not include a "death sentence clause," the text of the U.S. proposal to extend de facto monopolies on biological medicines by up to 8 years.

Heckscher, a seven-year breast cancer survivor, calls herself a cancer thriver. She has been treated by biologicals including trastuzumab (Hercepin) and pertuzumab (Perjeta). She is currently undergoing chemotherapy as part of a clinical trial, and continues on denosumab (Xgeva) treatment as well.

According to Heckscher, "For thousands of women to die unnecessarily of breast cancer because of the TPP is a horrible, cruel, premeditated, and avoidable catastrophe. The provisions being decided by TPP ministers today could allow drug monopolies on biologics for 8 years. Some of these medicines cost up to tens of thousands, even hundreds of thousands of dollars a year."


"When you have breast cancer today, you can’t wait 8 years or 7 years or 6 years for a treatment to become available or affordable. When you have cancer, even a one-year delay in affordable medicine can be a death sentence. That is why we call this proposed provision of the TPP a 'death sentence clause.' If it passes, thousands of women like me will die waiting." 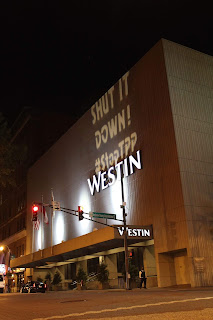 As the day progressed there were dozens of creative actions including a disruption of a TPP reception hosted by the Atlanta Chamber of Commerce and the use of high powered projection devices to project images on the hotel negotiations are taking place in.

Today community members disrupted the lobby chanting, "Stop TPP, no corporate greed" as longtime human rights activist Daniel Hanely attached himself to a railing on the floor that negotiations were happening. Daniel was eventually arrested and is still incarcerated. Daniel made sure that these trade negotiators got the message that the people across the world absolutely will not stand for these corporate dominated trade deals. Daniel took a big risk today, and his bail is likely to be high, please consider contributing and sharing his to his bail fund by clicking here.

Today at 5pm hundreds of Atlantans will gather at Woodruff Park and march to the Westin where the negotiations are happening. Can we count on you to join?