Landlord To Evict for Jaye Crawford Because of Political Activity? 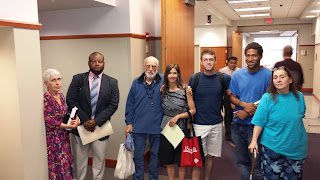 OOHA Member Jaye Crawford is known throughout Atlanta as an organizer of all things anti-GMO. For years she has campaigned tirelessly for the labeling of genetically modified foods and food security in general. Jaye and her daughter have lived in their studio apartment for 13 years. Jaye runs her personal fitness business out of her live/work studio. Her home is her livelihood. Since she has lived there she has made extensive repairs and improvements to the unit, always paid her rent on time and in full, and never broken any terms of her lease.

This is why it came as a surprise when in March her landlord told her that he would not be renewing her lease. Jaye immediately started working through American Friends Service Committee and Occupy Our Homes Atlanta to have a sit down meeting with her landlord to figure out what she could do to renew her lease, as her home is her livelihood. If she were forced to move not only would her daughter likely have to switch schools, but her small business would also take a massive hit. When her landlord Hugh Trotti was unresponsive to simple requests to sit down and talk, OOHA escalated the campaign. Jaye launched an online petition, we held candlelight vigils outside of Hugh Trotti’s house, we orchestrated call in days to the property owner’s private cell phone. Still no response from Jaye’s landlord. He was perfectly silent until today.

Today Jaye had her first court hearing against Hugh Trotti. Two months after Jaye’s lease officially ended Hugh Trotti and his lawyer finally filed eviction papers. At today’s hearing in dispossessory court Hugh Trotti and his lawyer again gave no reason as to why they were trying to push Jaye out. The judge ordered that Jaye pay her rent into the court, and set a trial date for Friday September 20th at 9:30AM in the Dekalb County courthouse.

While this is a temporary victory for Jaye (the alternative was that she would be told to move out completely within seven days or face eviction) the fight still isn’t over. Hopefully this hearing on September 20th will not only bring to light Hugh Trotti’s motives for displacing a single mother who has played by all of the rules and highlight the instances in which Hugh Trotti has ignored lease violations from other residents and targeted Jaye, but also result in a victory where Jaye get’s to stay in her home of 13 years.

Join us at the courthouse to support Jaye and call out Hugh Trotti for targeting a single mother because she’s politically active and vocal about what she believes in!