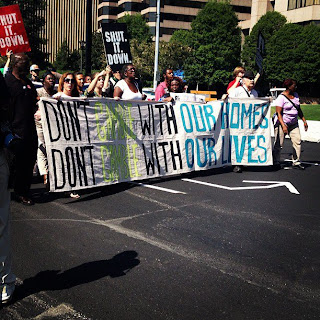 ATLANTA -- Today, September 10, 2012 at 11:00am, Occupy Our Homes Atlanta, American Friends Service Committee, along with people from all over the Southeast marched on Fannie Mae's regional headquarters in the heart of Atlanta’s most affluent real estate; Buckhead. 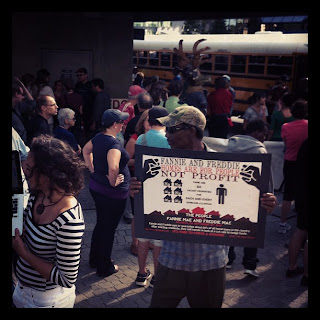 Today’s Southeastern action launched a national campaign aimed at highlighting and addressing the inhumane practices of Fannie Mae and Freddie Mac. People from Athens, Chattanooga, Miami, Orlando and Nashville joined Occupy Our Homes ATL organizers in holding Fannie and Freddie accountable for their abuse of our system and demand change.

Many underwater homeowners who Freddie and Fannie refuse to work with were present and demanded a meeting with Catherine Lasher of Fannie Mae. Robert Anderson, whose home is underwater, said he has tried to modify with Freddie Mac but with no luck."I want the investors to step down and talk to us," Anderson. "I've  been going through anxiety." 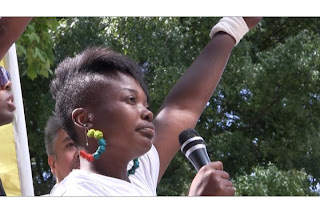 Currently Georgia is near the top of the list of most devastated states in this foreclosure crisis and as a region, the Southeast is the hardest hit per capita. Homeowners, renters and the homeless have been devastated by unjust practices that include refusal to reduce principal, bulk sale of homes to investors at 10-20% of market value, and holding properties hostage in communities hit hardest by the crisis. In Atlanta there are six vacant homes for each homeless person. This is not acceptable. Speaking on behalf of thousands in Atlanta’s growing homeless population was Michelene Meusa, mother of two who became homeless after going from under employed to unemployed. While addressing the crowd Michelene stated, “Fannie Mae and Freddie Mac stop holding these unoccupied, vacant, boarded up properties hostage! The hostage situation is over! People always talk about “Oh, well you know, homeless people are bums.” The biggest bums are right up there (Fannie and Freddie)”. 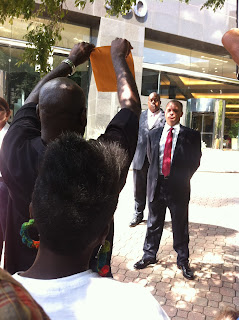 Fannie Mae and Freddie Mac are amongst the largest players in the economy controlling about 60% of the mortgages in the US. After gambling with our homes, and buying up subprime mortgages during the housing bubble, they were placed under conservatorship of the US government in 2008, receiving billions of taxpayers dollars. Now, four years later, they continue to put people out of their homes, people like Laura Johns. Laura Johns traveled all the way from Orlando to confront Fannie Mae’s unwillingness to modify here severally underwater home stating, “We talk about the middle class getting broken down. This is it. They're taking all of our wealth. You guys got debt forgiveness. You guys got a bailout. It's time for the homeowners to really be paying what their homes are worth.”

Recently Edward DeMarco, acting director of FHFA, has refused to offer principle reduction to help over 16 million underwater homeowners find relief and stay in their homes. His refusal flies in the face of suggestions from Timothy Geitner and the White House. The FHFA estimates that principal reduction could put up to $500 million back in the pockets of tax payers. Even with this they have began to sell houses at steep discounts to investors & hedge funds after refusing to reduce principal or accept rent from foreclosed homeowners. 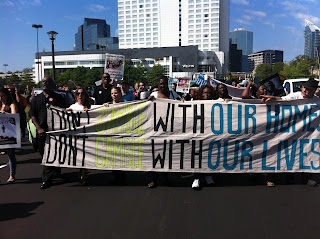 Fannie Mae and Freddie Mac are trend setters in finance capital. Should they undertake massive principal reduction to real market values, and turn homes over to communities instead of hedge funds the echoes of the housing crisis would be greatly dampened.

As taxpayers with an 80% stake in both Fannie Mae and Freddie Mac, today we demanded that both institutions: