The People vs Wells Fargo 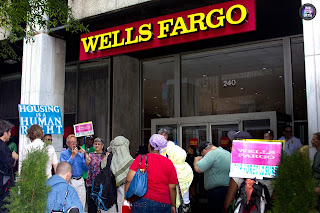 Despite, or perhaps because of, Wells Fargo’s cavalier and callous actions towards someone taking extraordinary measures to comply with the bank’s demands and stay in his home, Steve Boudreaux is refusing to give up his home to the bank. He has been occupying his home despite the recent commencement of eviction proceedings and taking a stand, the first of its kind in Cobb County, GA, for what is right and just. He is fighting for rescinding the foreclosure sale and a halt to the eviction proceedings. 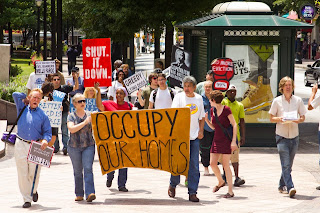 While Georgia recorded the highest number of foreclosures in the country recently, Steve claims that many homeowners in his area are ashamed to admit they are going through the same thing. “I look forward to breaking the cycle of silence that keeps so many Cobb residents from standing up to the banks and defending their homes,” he said when asked about his decision to take his fight public. 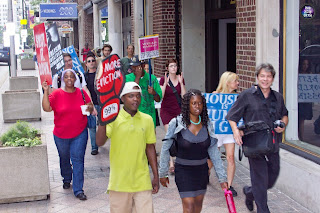 Steve, who is now employed and getting back on his feet, needs your help to fight this unjust foreclosure eviction. Just ten days ago after a day of phone calls and emails to Wells Fargo big wigs Adam Lawmen, a Wells Fargo representative, committed to work on rescinding Steve’s foreclosure and moving forward with a modification.

As of yesterday Wells Fargo refused to rescind Steve's foreclosure, which means they are willing to stand by and watch him get kicked out of his home. 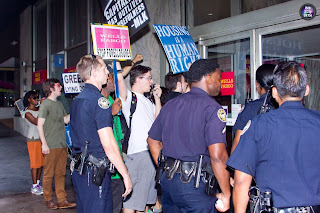 So we decided to head over to a Wells Fargo branch and give them a taste of some shame therapy. While several of us met with the branch manager and demanded he contact his higher ups to resolve the matter, over a dozen people participated in a direct action training right outside the bank.

The bank manager agreed to follow up with us and Steve on the matter. Ultimately we know it’s not his call, nor can any of the workers have a real say in whether a foreclosure eviction goes down. Our message was to the higher ups at Wells Fargo. 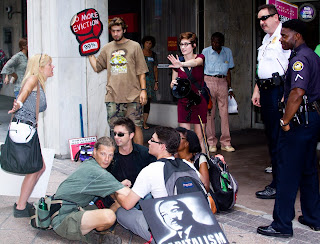 We will no longer allow foreclosures and evictions to go down in our communities without a fight. We simply can’t afford another boarded up house while so many need a roof over their heads. If financial institutions and our government can’t figure out a way to truly address the housing crisis then it’s up to regular everyday people to enact our own measures, it’s up to us to fight for our neighborhood.

Please sign the petition to save Steve’s home HERE