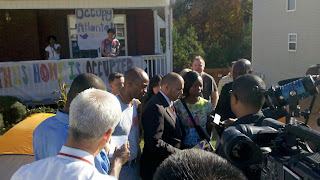 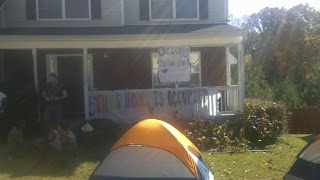 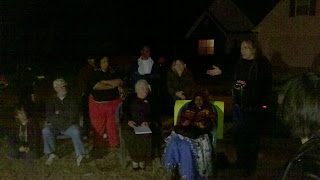 SNELLVILLE, GA - Occupy Atlanta goes out into the suburbs where the impact of foreclosures and deceitful bank practices are being felt just as they are throughout the Atlanta metro area and the entire state. Georgia has the fourth highest foreclosure rate in the nation while Atlanta lost more jobs last year than any other city in the United States.

Tawanna Rorey is a full-time homemaker, while her husband works in law enforcement; they have three children. The house on Shoreside Circle was their first home purchase, in 2003. When SunAmerica, their original mortgage company went out of business, their mortgage become securitized and was eventually purchased by Fannie Mae and serviced by EverHome. The Roreys had never missed a payment on their mortgage, but sought loan modification because of rising expenses and also because they were trying to send their oldest daughter to college. They were told by EverHome they would have to show financial hardship and should do so by missing a payment; this practice is increasingly common and puts homeowners at risk unnecessarily. EverHome began foreclosure proceedings immediately while also moving forward with the loan modification, a practice called “double processing.” At this point the Roreys approached by a con artist named John Harris; he pretended to be an advocate for borrowers who would help them with the loan modification process. His real motive was to gain access to homes which were being foreclosed on so that he could pretend to be the landlord and rent them once they were empty; he was arrested in Cobb County October 17. Before the foreclosure they engaged a lawyer who did not file properly; the suit was dismissed for that reason. At that point they engaged a new lawyer who is addressing the situation as it now stands.

Occupy Atlanta currently has a group occupying the home, with the family’s blessing. So far the Gwinnett County Sherriff’s Department has not served the eviction notice; the delay has allowed attempts to stop the foreclosure to go forward. Additionally, Occupy Atlanta has helped an Occupy Gwinnett group to form in order to address issues important to people in Gwinnett County.

The Rorey family’s story is just one example of a situation unfolding in communities all over all over the United States. Inadequate regulation of lending practices, including inadequate protections for borrowers, creates a situation where even people in relatively good financial shape can wind up facing foreclosures and legal nightmares.

As Tawanna Rorey said, “I never thought I would be in this position.”

Occupy Gwinnett – Please call Judge Karen E. Beyers to ask her to overturn her decision against this family: 770-822-8605. In addition, please encourage Sherriff Butch Conway to continue to show forbearance while we try to find remedies for this family: 770-619-6500.