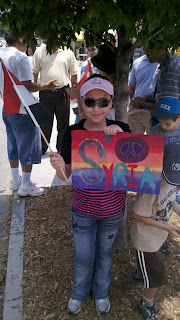 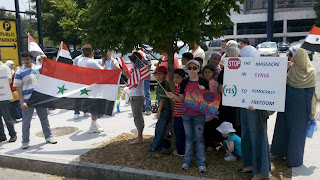 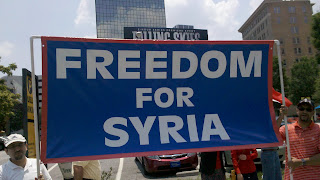 Today 50-60 folks from the Syrian community, along with some allies, gathered at the CNN center to express solidarity with the people of Syria and to condemn the brutality displayed by the Syrian Government.

Yesterday alone an estimated 200 peaceful protesters were gunned down in Syria. Their crime was demanding basic civil rights, constitutional reform, and the implementation of concrete measures to fight government corruption.


The demands from the Atlanta Syrian community were simple, and are basically echoing what Syrians in Syria are demanding.


· Stop the use of live ammunition against peaceful protesters and children

· Release all political prisoners and prisoners of conscience

· Recognize political parties and allow for genuine freedom of expression

The push for broad reforms in Syria should be seen as part of the broader movement in the Middle East, "Arab Spring" as some are calling it. Here at American Friends Service Committee we have been in talks with several different Arab communities we've worked with over the past three years about the possibility of bringing everyone together for a panel on the Arab Spring. It could be an opportunity to explore the global implications, as well what it means for folks who have migrated here from the region.