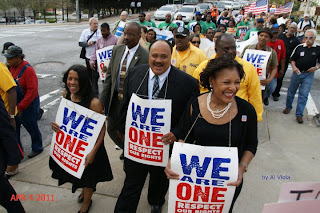 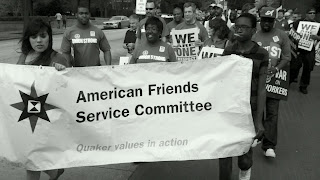 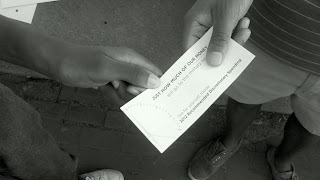 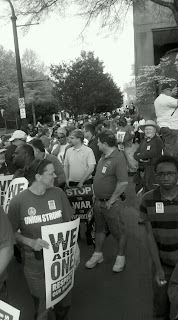 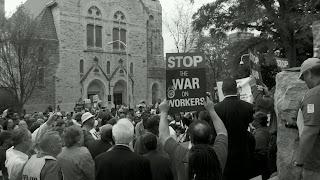 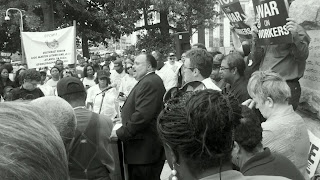 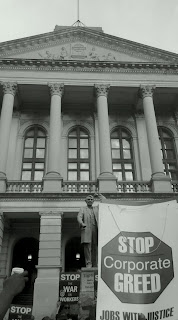 Today around six hundred people gathered at the King Center to march to the Georgia State Capitol to demand that governments across the country and corporate interests respect workers' rights.

The action was part of the international campaign, We Are One. It was no accident that the rally was scheduled for April 4th, the day Martin Luther King was assassinated. Today marked 43 years since Dr. King was murdered outside his hotel in Memphis. He was in Memphis to support sanitation workers right to collectively bargain for a better life.

Today's rally brought out workers, students, community members, young, old, black, white, brown, and everything between. Everyone that graced the mic at the rally made case for connecting all struggles. Workers rights, students rights, immigrant rights, gay rights, need to be in the sentence. An attack on one, is an attack on all.

Martin Luther King III spoke at the capitol, reiterating his fathers most relevant messages on labor issues. His speech drew much applause but was also a painful reminder that all the issues Dr. King died for are just a pressing as they ever were. Workers rights are under attack, our state and federal budgets are being robbed by military and prison industrial complexes, programs of social uplift continue to disappear while wallstreet gets billion dollar bailouts, and Jim Crow has moved from the law books into economic policies. Martin King III said that if his father was alive today, he would be fighting for workers rights.


AFSC was also there to show our solidarity. We passed out countless, "One Minute For Peace" fold outs that make our federal budget easy to read. The fold outs highlight the economic crisis of priority. The resources our communities need are there, they're just being spend on the wrong things that benefit the wrong people.