Take A Bite Out Of Apartheid With One Call/Email!!! 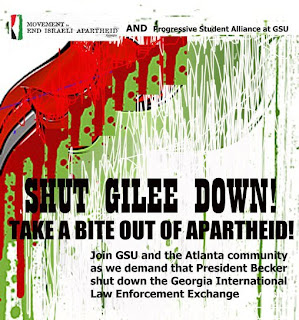 The Georgia International Law Enforcement Exchange (GILEE) is a program coordinated by Dr. Robert Friedmann and the GSU Criminal Justice Department. The purpose of the program is to facilitate training exchanges between Georgia police departments and others around the world. While the GILEE program has relationships with several international police agencies,their relationship with the Israeli police is the most intimate and most troubling. Police (as well as other public employees) from across Georgia have attended over a dozen
delegations to Israel in recent yeas to learn
“counter-terrorism” techniques. Likewise,
Israeli police have traveled to Georgia under
the auspices of GILEE to learn drug law
enforcement techniques.

Why should You be concerned?

Israel’s so-called “counter terrorism”
techniques are in reality the protection
and support of an apartheid state. For over
sixty years, Palestinians have lived under a
regime of racial segregation and oppression.
In Palestine-Israel, Palestinians live under:


1. Systemic expropriation of land and property
through laws and unstated practices

2. 5 million Palestinians (not including millions of exiles) can only live in a very small percentage of the land in Palestine-Israel

3. Creation of Bantustans, or Palestineonly ghettos in which Palestinians are deprived of basic survival necessities including food and clean water

4. Creation of Jewish-only areas and roads, which serve to restrict the movement of Palestinians

6. Destruction of Palestinian’s economic means of survival and social infrastructure

7. The ongoing commitment of the Israeli government to continue with racial segregation and ethnic cleansing.

Israeli police are essential
to the carrying out of these
racist and inhumane practices. Their vision
of “counter-terrorism” is a one of torture,
arbitrary arrest and detention, extra judicial
killings, discriminatory profiling of Arabs,
and a military court system that falls short
of international standards for fair trail,
among countless others. The very policemen
conducting these practices in Israel are
teaching them to Georgia police officers so
they can carry them out on Georgia soil.
Georgia International Law Enforcement
Exchange not only supports violations of
human rights against Palestinians, but also
gestures to the goal of implementing them
here in Georgia toward populations already
targeted by discriminatory police practices.
We need not forget that the Atlanta
Police Department has a long and troubling
history of violating citizen’s rights, racial
profiling, and similar though not identical
cases of extra-judicial murder and physical
abuse, with Kathryn Johnston, Tremaine
Miller and Pierre George only a few of the
victims in recent years.*


You Can Help Shut Down GILEE And Take A Bite Out Of Apartheid Right Now!!
We are calling on all of our friends from around the country to take five minutes to do this today, and then tell friends of conscious to do the same!! Let our collective voices amplify into an unstoppable force!

The Movement to End Israeli Apartheid and the Progressive Student Alliance demand that GSU President Becker shut down the Georgia International Law Enforcement Exchange. We ask that you join this critical national effort to put pressure on President Becker to SHUT GILEE DOWN.

"My name is _________ and I am calling from _________. Dr. Becker, I strongly urge you to shut down Georgia International Law Enforcement Exchange. With GSU’s growing international reputation, the university cannot afford to be associated with Israel, a country that consistently violates international law. One such example is the May 2010 killing of nine unarmed civilians in international waters carrying humanitarian aid to Gaza. I urge you to move toward Shutting GILEE Down and to meet with your students and concerned community members to discuss this matter. Thank you."

AFSC Atlanta is proud to support this effort, we thank you in advance for your willingness to take the time to make the call, to witness for peace, to work against inequities, and build a more just world.


*Taken From MEIAG's, "What You Need To Know About Georgia State Universities Involvement With Human Rights Abuses" pamphlet.