Justice in Palestine, a Global Movement 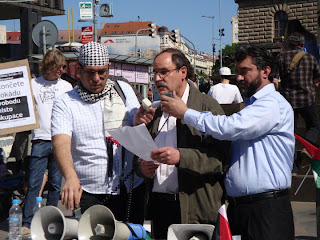 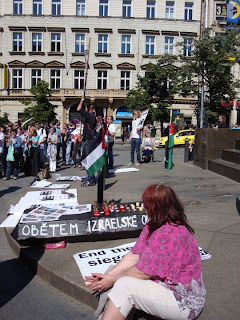 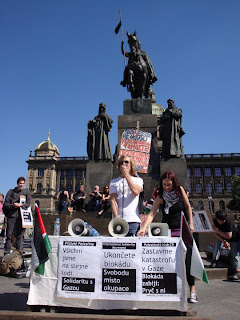 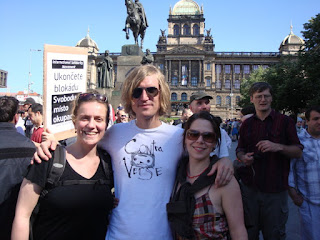 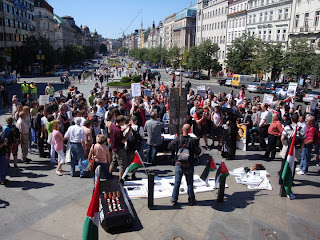 I've been looking forward to a vacation for a while, especially this one. Four years ago a very close friend of mine moved to Europe and this vacation was an opportunity to visit. It just so happens that he's been staying in Prague, Czech Rebulic for over a year now. I've heard nothing but great things about the city and I frankly need a break from Atlanta to regain my breath. Within the first day of arriving in this beautiful city I became aware of Gaza attack on the Flotilla. I was honestly quite shocked, equally shocked to hear US and some international press promoting Israel's excuses for boarding these boats on international water in the middle of the night and killing unarmed peace activists. The wildest accusation was that folks on the Flotilla had links to terrorist, simple lie created out of thin air, I personally know some of these folks and am very familiar with the organizations involved. I appears the only terrorism aboard that ship was at the hands of the heavily armed Israeli military personel, which we know killed at least nine people with 30 bullets, harmed an additional 82 people, 30 of whom were shot with bullets.

One of the first things I did when I got to a computer was google Flotilla attack+Prague demonstration. I immediately found Eva Adams, a local organizer with International Solidarity Movement. Her group had been working with another local group, Friends of Palestine, to organize a series of demonstrations against Israel's attack of the Flotilla. On my second day in Prague, a city I really knew little about, I found myself in front of the Israeli embassy holding a sign that said, "End the Blockade, Freedom not Occupation." We marched to the Turkish embassy and organizers spoke with a representative and left flowers in remembrance of their fallen. I met several very nice folks who helped me find my way around the city, none more helpful then a young man named Ondra. Ondra made sure I had directions to each demonstration and offered to meet me at the metro stations to insure I wouldn't get lost.

After online correspondence with Eva she asked if I would be willing to speak at their upcoming demonstration in Wenceslas Square, which is the place Prague goes when there's social unrest. I was surprised as it was clear that I do not speak Czech. Eva thought it would be good to have one english speaker, as many in the country speak english, and it might be good to hear from someone who personally knew someone on the Flotilla. There were actually several people at the demonstration who knew folks on the Flotilla, including Eva. In fact there was one man from the Czech Republic that was actually on the Flotilla, and he was able to join us. After several people spoke I took the stage and spoke briefly of what I had heard from the Flotilla, and what my Gaza co-workers had reported from the ground on the local reaction to the international response to the attack. I spoke about the Movement to End Israeli Georgia and the need to build and link a global movement to cut cultural and economic ties with Apartheid Israel. We then marched to the embassy again through the busy streets of Prague, very exciting.

My experience here in Prague had affirmed the idea that we need not wait for our world leaders to lead us to peace and justice, perhaps they never will. At this point the stakes are to high to wait around for them to save the world. We are going to have to be the agents of change if things are to change. We must build a movement beyond borders, bigger then governments, bolder then they could expect. We must unite struggles against racism, militarism, and economic injustice. No where do these evil's converge on one spot as they do in Palestine right now, and as an American, I'm aware of the intimate connection I have with the gears of this conflict.


Posted by Atlanta Economic Justice Program/AFSC at 4:12 AM