Mayor Reed Agrees to Meet With Residents After 3hr Sit-in 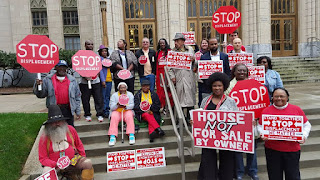 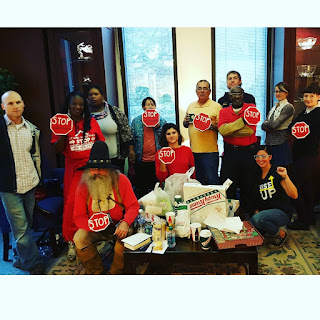 Today the remaining residents of Peoplestown descended upon City Hall and the Mayor's office to demand the meeting he promised them weeks ago.  A group of 50 people held a sit-in at the Mayor's office until his Chief of Staff scheduled a meeting with James and Bertha Darden and Tanya Washington, whose homes bookend the block that the Department of Watershed has slated for demolition to build a park and pond.

After holding a spirited press conference on the steps of city hall and then a three hour sit-in the Mayor office finally agreed to a meeting with terms the residents were happy with.

The meetings are scheduled for Tuesday December 1 at 10:30 and 11:00 a.m.  The Mayor's office has agreed to direct the Department of Watershed to refrain from threatening the residents with legal action until the meeting takes place.  The residents are grateful that they will be able to enjoy the Thanksgiving holidays without fearing being pushed out of their homes.  They are looking forward to a meeting with the Mayor focused on their demand that the City's plan accommodate their homes and that they, like their neighbor Ms. Mattie Jackson, be permitted to remain in a community they love and helped build. 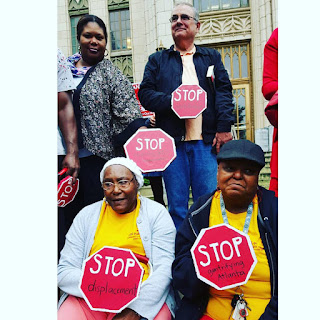 Today's bold resident led action is a reminder that regular everyday people can stand up against gentrification and mass displacement. At American Friends Service Committee we believe that communities should be controlled by those that live in them, not developers or other entities in search of new profit streams. Today is a small victory in a much broader fight.